A 70-foot rocket blasted off from beneath the wing of a Boeing 747 over the Pacific Ocean Wednesday, marking the second successful orbital flight for rocket startup Virgin Orbit.

The plane, nicknamed Cosmic Girl, took off from California Wednesday just before 7 am PT, and about an hour later, the pilot hit a large red button to cue the rocket’s release from beneath the aircraft’s left wing. The rocket then fired up its engine and swooped toward outer space as it revved up to more than 17,000 miles per hour. The rocket’ second stage then completed what Virgin Orbit calls a “BBQ roll,” in which it briefly spins to keep it evenly exposed to heat before deploying the group of small satellites housed in the rocket’s nose cone into orbit. 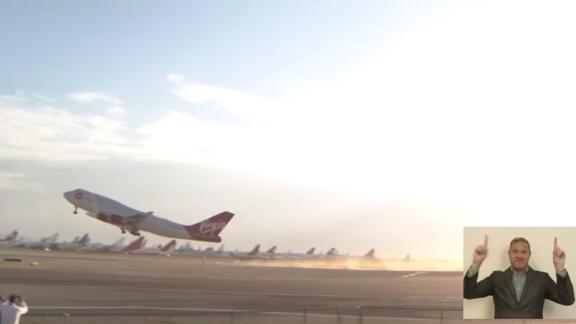 Virgin Orbit’s retrofitted Boeing 747 airplane, with a rocket affixed beneath the wing, takes off from California ahead of launch.

The company’s first successful orbital flight came in January, and Wednesday’s mission marked the first that was considered a fully operational — rather than a test — mission.

The satellites belong to a variety of Virgin Orbit customers, including the US Defense Department, a Polish startup called SatRevolution, and the Royal Netherlands Air Force.

Virgin Orbit named the mission “Tubular Bells, Pt. 1”, after the Mike Oldfield record that inspired billionaire and Virgin empire founder Richard Branson to start Virgin Records in 1973. Branson founded his suborbital space company, Virgin Galactic, in 2004, and orbital satellite launch startup Virgin Orbit was spun off from that venture in 2017. Both companies still share the branding of Branson’s Virgin Group, which has expanded into numerous hospitality and tech-focused business areas over the past few decades.

Virgin Orbit is one of dozens in a new wave of rocket companies that have sought to develop small rockets capable of taking frequent, relatively cheap flights to space.

Virgin Orbit — along with competitor Rocket Lab — are among the only such startups to successfully put the lightweight rockets they developed into orbit. And Virgin Orbit stands out among competitors for its decision to use an air-launched rocket, which takes off from beneath the wing of an airplane rather than launching vertically off a ground pad.

SpaceX, the Elon Musk-led venture, builds much larger rockets than Virgin Orbit’s 70-foot LauncherOne vehicles, but SpaceX did recently move to begin competing in the market for launch small satellites by offering massive rideshare services on its much larger Falcon 9 rockets. The company’s second rideshare launch is slated for Wednesday afternoon.